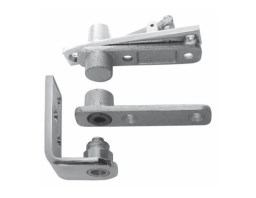 The emergency rescue hardware set is a two part solution offering a quick release method for WC compartment doors and other doors where fast access is required in the event of an emergency. The removable stop feature, in tandem with this double action pivot allows doors to be opened away from the obstacle or barricade facilitating unhindered access through the opening.

The Emergency Rescue Hardware Set can be used on any internal door designed for double action operation, with a maximum weight of 65 kilos – dictated by the jamb mounted pivot set.

The above mentioned section of Approved Document M includes design considerations and provisions to address the issues mentioned in the introduction. Specifically: “5.4 e. WC compartment doors, and doors to wheelchair-accessible unisex toilets, changing rooms or shower rooms have an emergency release mechanism so that they are capable of being opened outwards, from the outside, in case of emergency.”

All privacy function locksets and most toilet compartment ‘indicator’ bolts offer a means of retracting the latch bolt from the outside – usually via a straightforward tool such as a slotted screw driver. This is a sufficient safeguard in most situations. However, in those instances where there is potential for patients to fall against the inside of doors or for residents of secure units to barricade themselves inside bedrooms then a little more sophistication is called for - i.e. Stanley's Emergency Rescue Hardware Set. 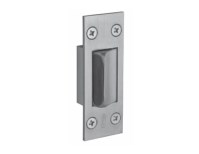